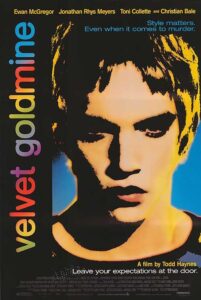 October 12th at The Babcock Theatre

Get ready for Todd Haynes' glam rock masterpiece! Velvet Goldmine is a fictional legend of two pop stars from the 1970s, Brian Slade and Curt Wild, and the super-fan reporter investigating their strange history a decade after Slade's assassination of his alter ego Maxwell Demon.  An androgynous journey through the true history, rumors, and legends of the glam rock era, with an all-star and an electrifying soundtrack, we're so thrilled that Creative Director Brian Oestreich has chosen this unsung 90s classic (think of it like a Boogie Nights for the glam rock scene) as his Staff Birthday Pick!